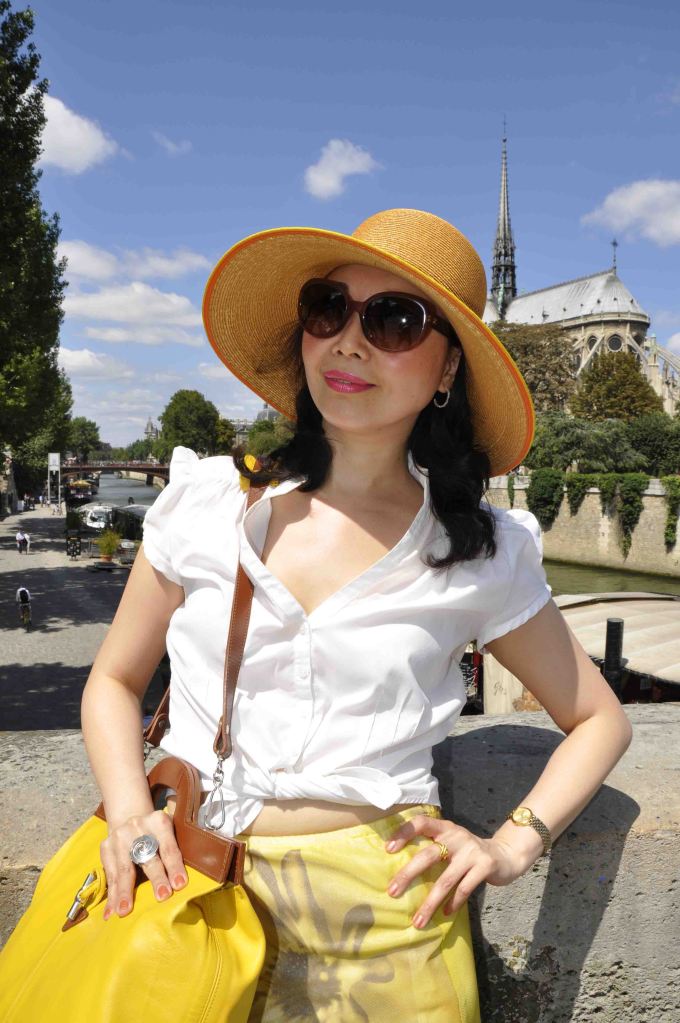 So, speaking of… I have many romantic moments in my memory and one has a lot to do with La Seine…
In 2002 I enrolled at France Langue in Paris for a several weeks’ French language course, and during this period of time I home stayed with a Parisian family, who hardly spoke any English at all.
One day, a young Parisian man spotted me in Gare de Lyon – the metro station which took me to my language school and home, he soon asked me out on a date.

My first date with François – the young guy from the station – was a Sunday picnic by La Seine.
Between François and I, we brought some cheese; a baguette; grapes; sandwiches and a bottle of wine. We strolled along La Seine until the tourists were fading away.
‘How far do we have to go?’ I asked.
“There’s a nice spot I know of if we keep walking.” He assured me.
As we found his perfect spot on the riverbank and facing a picturesque view, I thought ‘That’s the benefit of dating a local right there!’ And soon I realized that we had become one of those ‘romantic couples’ I had seen countless times on cruise rides. We were now the love birds, enjoying the sun bathing and kissing on the riverbank – it’s one of the scenes of Paris.

In between our light conversation, François tucked his head beneath my hat’s wide brim to steal kisses from me.
After a long picnic, we began strolling back along the river until we reached a place where people danced on the riverbank.
‘Wow~ Look at that!’ They seemed to be enjoying themselves very much!
“Port Saint-Bernard, every summer people dance here!” François told me.
We didn’t join them as they all seemed too close and too experienced. Instead, we went somewhere nearby where we could hear the music and had our own secluded dance under a tree. (Yes, really. We danced.)

The feelings I experienced that afternoon; I am still searching for the right words to describe. All I can say is that my senses were over loaded.., from being in Paris; the view of La Seine; the French wine; the French kiss; the dancing by the riverside, and simply being able to truly indulge in Parisian life; not just another tourist wondering around the Louvre…
All these emotions joining together and wrapping up into a huge ball of joy. The joy was so overwhelming that I felt I could not contain it within…..

Whenever I shared this experience with friends (mostly females), I used ‘romantic’ to describe how I felt, although it was more than just romantic, but I guess it’s as close as I get!
Today I realize that not only did François give me an unforgettable date by La Seine; he gave me a memory to be treasured which can never be recreated.
Many years have passed and many trips back to Paris… Don’t ask me why but you can always spot me strolling along La Seine wearing my wide brimmed hat…..

For Bastille Day, I’d like to dedicate this ‘When In Paris’ series to France! santé~

Self portrait with the collaboration of A.K.