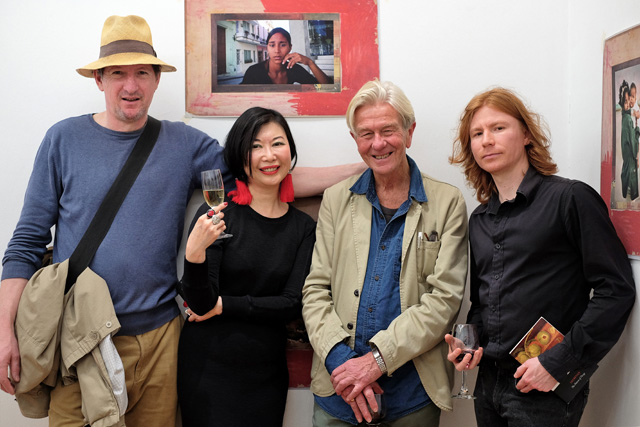 I don’t remember exactly when it started, what I do remember, was that Kent and I were about to watch June Newton’s Helmut by June documentary at home and he decided to fry some Chinese dumplings with red cabbage. I thought, why don’t we invite our good friend, fashion photographer and film maker Brett Hilder to join us!

It turned out to be a joyous night of food; wine and watching more than one fashion photographer documentary, as we then watched David Bailey and Annie Leibovitz after Newton.
That led us to our second movie night gathering, this time, we were invited back to Brett’s near by apartment and we watched a 2006 Chilean film Pretendiendo (Pretending) – AKA ‘Ugly Me’ in the US – which was Brett’s selection.
By the end of our third gathering, our Movie Club was formed and from then on, we had a routine: any Sunday night that suits us all and we all bring our favourite dishes.

The happiness our Movie Club has brought me is immense. I guess that being a world movie fan is just one of the reasons. The thing is, it’s very laid back, I have never taken a single picture during our gathering or felt the need to Instagram it; nor sharing anything about it on Facebook. In other words, I’ve been completely there to indulge in every minute of it!
We have conversations without being interrupted by smart phones. We enjoy each other’s company the way it was before the social networks took over.
So, why reveal my ‘best kept secret’ on my blog after all? Well, besides wanting to share my joy around, I want to encourage everyone I know to embrace life and friendship and spend less time sitting in front of our PCs or playing with our tablets and/or phones.

Fellow Movie Club friend Ben, who is an oil painter and a violinist; who, doesn’t live a social networking life has joined our regular movie gathering. The picture above, which was taken at Brett’s Habana Story – Cuba Photo Exhibition and Book Launch back in July at Badger & Fox Gallery, captured our current Movie Club members by our friend Nyk Sykes, from left to right: Kent, myself, Brett and Ben.

There was time when we were away; busy; sick; tired or preferred to be alone. Overall, we have done our best to keep our Movie Club going.
Here I’d like to show you a list of films (in order of the date we watched) that our Movie Club has played so far. In my coming post, I’ll reveal the details of my (above) ensemble…
So, here they are:

NEW POST UP!!! 💥
偶爾換個髮型也不錯！
Repost from @whitecaviarlife ...
目前正努力研讀的英文小說...
NEW POST UP!!! 💥
布拉格的春天...
在布拉格，我找到了自己最喜歡的餐廳！
NEW POST UP!!! 💥
A rare window of 15 minutes when there was no rain. A glimpse of what it would look like on a sunny day...
會閃的不一定是金子！
Two of many things I enjoy doing on a raining day...
When stripes meet polka dots in Paris...
Souvenirs we received from the Tissot NBA event a while ago...
祝大家元宵節快樂！！！
大年初二，來張金光閃耀的舊照！攝於布拉格的這個無今不巴的巴洛克式酒店。