There were countless politicians; movie stars and celebrities, Chinese and other nationalities, who have graced qipao in contemporary culture. Here I’d like to share some of my favourites…

Soong May-Ling, also well known as Madame Chiang, as the first lady of the Republic of China, she was often seen in qipao, especially at important occasions such as her Speech in U.S. Congress in 1943, and later on in the same year, attending the Cairo Confrence. She also appeared on the cover of the US TIME magazine three times, and twice wearing a qipao.

Leaving politic aside and talking movies, here are some of my favourite qipao movie moments…
Anna May Wong, the first Chinese American movie star who achieved international stardom in the 1920s. Wong became a fashion icon in the ’20s and the ’30s for her signature fringe and her China doll look.
1960s Chinese actress Nancy Kwan also made the modern cheongsam fashionable in western culture after her lead role in The World of Suzie Wong.
I always see Hong Kong Chinese movie star LiLi Hua as the ‘Chinese Sophia Loren’. LiLi starred in over one hundred films in Asia from the ’40s to the ’70s, a lovely photo of her taken with Clark Gable in Hong Kong Bay in the ’40s (see image below), not only was she in a qipao in that shot, she also wore cat-eye sunglasses. I love that look so much! A perfect east meets west!

Maggie Cheung in Hong Kong director Wong Kar-Wai’s In the Mood for Love, topped the list of my favourite qipao moments!
Almost every scene in which Maggie appeared, she had a different gorgeous qipao on. It’s hard to say whether it’s Maggie, who gave qipao the oriental sensuality or it’s the other way around? Therefore, perhaps both; made a marriage made in heaven!!!

A close second in the list of my favourite qipao moments would be Joan Chen in the Australian film The Home Song Stories (directed by Tony Ayres). A demanding role in which Joan played a nightclub singer in the ’60s Hong Kong AND a Melbourne suburban house wife… All the time wearing qipao sensationally!
Twice Oscar-winning director Ang-Lee also made this ‘oriental sensuality’ a male fantasy on the big screen – Lust Caution. Lead actress Tang Wei wore suspender belts and stockings underneath those qipao. WOW! I’ve never seen a demure young lady that sexy!
Another sensational qipao moment was Michelle Yeoh, who presented at 2011 Academy Awards wearing a crystal beaded tiger print floor length qipao gown.
I also adore Gong Li’s modern; low cut qipao (by YSL) which she wore beautifully at the 2004 Cannes Film Festival.

In more recent years, Ann Hathaway was wearing a floral print blue qipao in the film One Day.
The list goes on and on… Along with other international mega stars, such as: Madonna (American Music Awards 1995); Celine Dion (World Music Awards 2004); Alicia Keys; Kelly Preston; Kylie Minogue; Emma Watson and so on… 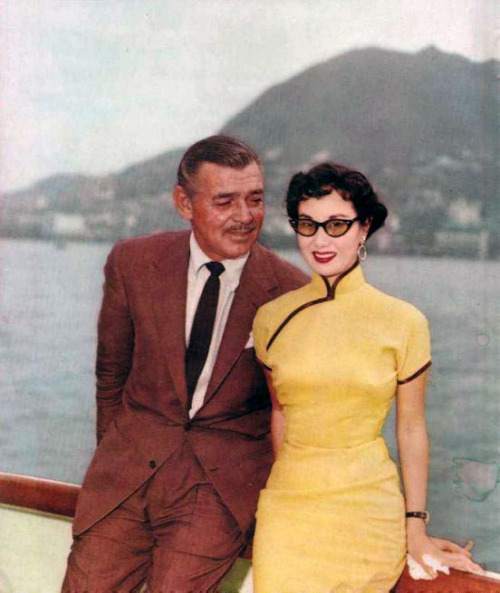 一張不對焦的大頭照...
At Emmanuel's 60th One Night Only exhibition/birthday celebration last night!
九零年代末的一個夏天...
與財神爺來張合照吧！今天最有年味了！恭喜發財！
分享一下過年前的一頓聚餐！
新年快樂！恭喜發財！🧧
Sharing a photo of Elvis impersonator & singer Steve King and me today to congratulate Austin Butler who wan the Best Actor in a Drama for movie Elvis at the 80th Golden Globes Awards.
也是出自九零年代...
December photo dump!
Our simple (yet yummy) lunch yesterday... No cooking required.
Happy Holidays, to everyone!
Throwback a stunning image by @kents_travels. He took this picture during our Sounds of Silence twilight + dinning tour at the Uluru- Kata Tjuta National Park in 2019.
We were delighted to be invited to Billich Gallery's Xmas celebration on Wednesday night! It's the 3rd Xmas party I attended this December... From now on to end-of-year will be small yet intimate gatherings only.
Lately, all eyes on the newly opened Sydney Modern - the expanded Art Gallery of NSW. I thought I share an old photo of myself leaning against one of the pillars near the facade of the building.
暫且告別多風的晚春，夏天總算來了！